Annie and her husband, Alain say that their now ten-year-old son Maxim is very inquisitive about life.  He is a deep thinker, an investigator and a bit of a young scientist.  So when Maxim came to Annie at the age of eight to describe how his eyes “worked”, she was not alarmed.  Maxim simply said that one of his eyes saw light better and the other saw details better. She did not realize that this was his first recognition that something more was developing with his sight. Maxim reads several hours every day, is attentive at school, and is a very observant kid who constantly comments about the things he sees. There were no other signs to indicate vision troubles.

In February of this year, Maxim again came to his mother describing his vision. This time he was describing pain.  Maxim had a headache, and said that his right eye was sore and it felt like there was a lot of pressure in the socket.  Annie and Alain were concerned.

Alain took Maxim to an optometrist.  Maxim explained his symptoms and Alain his concerns.  The optometrist did a thorough exam and became concerned as well. Maxim could not see the big E on the wall with his right eye, and the pressure in that eye was close to 60. He could see a mass in Maxim’s eye.  They would need to see a specialist immediately to determine the cause of the mass.

Their family lives in Whitehorse, the capital of Yukon and the largest city in Northern Canada.  That being said, the population is just 40,000 and specialty medical care is limited.  They needed to travel to Vancouver (a 2 1/2 hour plane ride) to receive any specialty care.

Annie and Maxim boarded a plane that afternoon and by that evening they met with Dr. Navajas, a retina specialist at the Eye Care Center.  After two hours of tests, Dr. Navajas informed them that he believed Maxim had Coats’ Disease.  Coats’ is a rare condition in which the vessels behind the retina leak fluid, potentially causing retinal detachment and visual impairment.

The next day Annie and Maxim went to another clinic to confirm this diagnosis.  They met with Dr. Patrick Ma.  Dr. Ma performed many more tests.  Maxim’s Coats’ diagnosis was confirmed.  They were told his disease was in stage 3A, and his retina had detached by about 70%.  Dr. Ma administered an Avastin injection to relieve the pressure and pain that Maxim was experiencing.  Two days later, Maxim had his first laser surgery at BC Children’s Hospital to cauterize the leaking vessels behind his eye.

Since that day, Maxim has needed to travel back to Vancouver every six weeks for an Avastin injection and routine checks with Dr. Ma.  He will likely need to maintain these appointments for a year.  Maxim has another laser surgery scheduled for this summer.  He also uses two different eye drops daily to control the pressure.

While doing research online, Annie learned that a retinal Glow may occur in the flash photos of children with Coats’. Having never used the flash when photographing Maxim, she had not seen this very important sign.  A few weeks ago, Annie was curious and turned on her camera’s flash.  There it was….  a clear, golden Glow.

Maxim’s curiosity about life has led him to research and understand his Coats’ Disease.  He is currently working on a presentation that he will deliver to his classmates explaining the disease.  Like her son, Annie is also determined to spread awareness and action.   She hopes that soon, Yukon and other provinces and territories in Canada will offer free vision screening in schools.  She wants to share their story with as many as possible in hopes of making a change in screening as well as informing others of the signs that may occur with vision illness.  Maxim’s family is determined to help as many other children discover their illness and receive more timely care.

We at Know the Glow look forward to watching this amazing young man lead the way for others as he continues his journey through his condition.  Watching Maxim embrace his challenge and already find ways to turn it into a gift for others is a credit to him and his phenomenal parents.  We can’t wait to see the wonderful things that await this very special family. 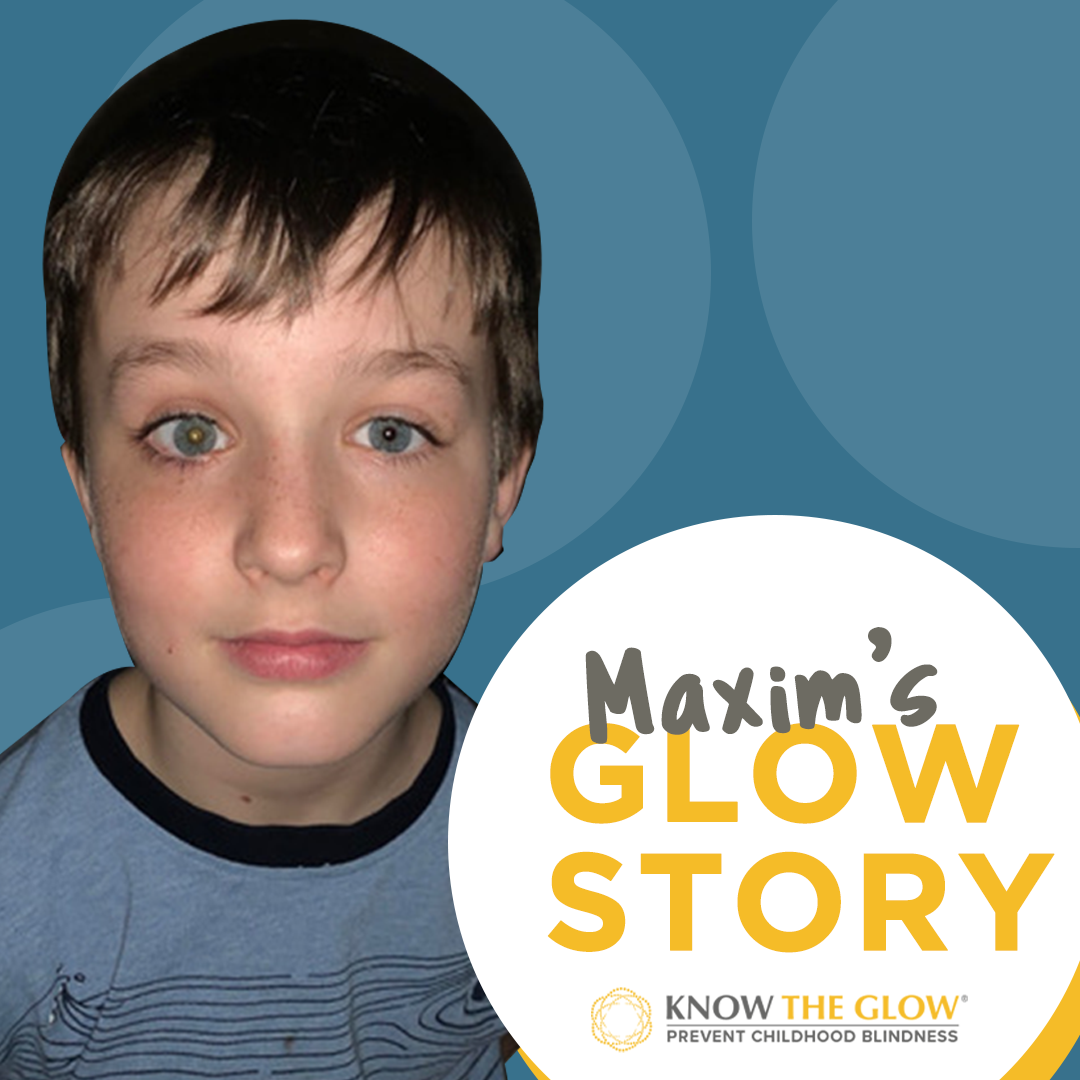