Kerri Wilson is a great believer in never walking past an opportunity. She has been an ocularist in Sydney, Australia for 30 years.

As Megan Webber, co-founder of Know The Glow, discovered over a zoom conversation the road to becoming an ocularist was not the journey she had originally intended for herself. Kerri had been studying psychology at University, living in Sydney, and working in hospitality to support her studies. Kerri periodically checked in with the local job office to see what other options were available. A  six-month maternity relief job as a lab technician for an ‘eye maker’ at Sydney Hospital caught her attention. She had no idea what the job entailed but she knew she was not going to miss investigating the opportunity. She inquired to see if she could go to the hospital and find out more about the job firsthand.  Kerri arrived, found the position fascinating, and applied for the job on that day!

While she continued her studies in psychology, the six-month period in the ocularist clinic quickly passed and she was offered a full apprenticeship. Ultimately, with only a few classes remaining, Kerri realized she did not want to be a psychologist and left the university. She completed her training as an Ocularist, going on to work for over ten years at Sydney Hospital, including managing the department. In an industry where it is difficult to enter independently, Kerri started her own business in September 2006.  All as a result of her decision not to pass up on investigating that one opportunity.

Kerri shared with Megan that her overall approach with young children is to have patience. She would rather the process take a little bit longer and not sacrifice the trust she wants to build between herself and her patients. As a young lab assistant, she recalled a time when she witnessed the old-school approach to fitting a young child for a prosthesis. This particular patient was 2 – 3 years old.   They took him out of his pram and pinned him down on the ground. The child was hyperventilating and very frightened by the end of the process. Kerri concluded that there must be a better approach.

She knew the child would remember that frightening experience and probably not want to return to the ocularist.

Seeing that child made such an impression on Kerri that she vowed to herself that she would be different.  She explained to Megan that when she has a new patient she first does a family “Meet and Greet”.  She finds it very helpful to have that familiarity first without wearing the white lab coat. Once she builds rapport, she allows the child to have ownership of the decision-making and to feel that it is their choice to have the prosthetic made.  Kerri admits it can take a little longer but it is better in the end for the child to be included in the process and feel a connection with their ocularist.

Megan was curious if Kerri always naturally had an aptitude for painting and drawing since as an end-to-end ocularist she is fashioning and painting the eye in addition to fitting the prosthetic. Kerri explained that being an ocularist is a nice mix of art and science.  You do need to have some aptitude in the arts but you can learn and develop those necessary skills.  In fact, Kerri said that not unlike looking at a painting and recognizing who the artist is by the style and brush strokes, you can look at the work of multiple ocularists and you will see the subtle nuances of each Ocularists’ style.

Kerri is an active member of the Ocularist Association of Australia and told Megan that they come together to support one another and collectively maintain certain standards.  Annually they come together to introduce new information and keep up-to-date.  The OAA goes in many different directions with members of the association attending conferences in South Africa, Europe, the UK, and the US and providing services in Dubai, Timor Leste, and New Caledonia.

KnowTheGlow is pleased to highlight the very personal and incredible work that Kerri Wilson provides to all her patients.  Families that most certainly appreciate the time, patience, and individualized care that Kerri brings to her work every day. 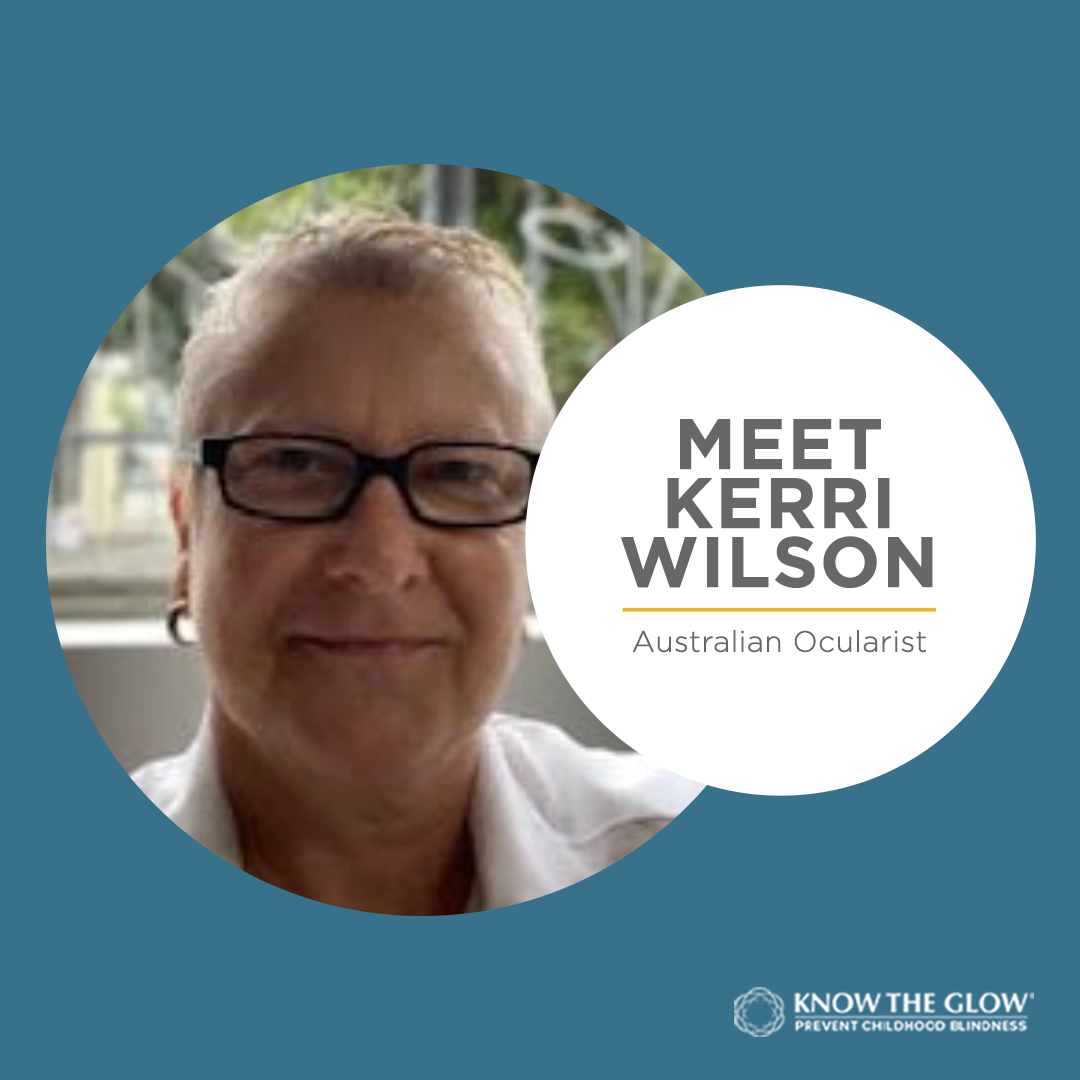