Hillary Yeager has spent most of her life watching her father, Dan Yeager, make artificial eyes in his practice in Iowa City, Iowa. Yeager Ocular Prosthetics is a family owned and operated business. Hillary initially decided she was going to be a dental assistant and went to school for dental assisting. In 2012, Hillary could not ignore the calling to work in the same business she had grown up and loved, so in November of that year Hillary joined her father’s practice in ocular prosthetics.

Hillary quickly acclimated to the new environment and started building long lasting relationships with many of her clients.  Hillary says that while initially it is not always a happy meeting with children who are facing lots of difficult challenges but very quickly her patients begin to become family. Those relationships are so rewarding for Hillary. In 2017, Hillary became a Board Certified Ocularist through the National Examining Board of Ocularists. In 2020, Hillary became the administrator for NEBO, a position she holds to this day. Her father, Dan, is the Executive Director of NEBO, a role Hillary hopes to one day take on as well.

During a chilly winter in 2018, Hillary began to pass time at home using her creativity and she found that she had soon invented the Ocular Octopus. Hillary wanted a new way to present the example of an eye socket to patients and an effortless way to show them how to insert their prosthetic eye. Since YOP is a family business, everyone jumped in and helped Hillary bring her creative idea to life! Initially they created 100 hand-sewn Ocular Octopi!  Hillary’s mother elegantly embroidered each one and her incredibly talented sister helped beautifully illustrate a book to complement the Ocular Octopus. With the funds from each octopus sold, she began crowdfunding to secure a future manufacturing of the octopus.

Hillary has already hit her crowdfunding goal for her first shipment of 600 octopi!   They are arriving any day!  The new octopi are going to be offered in three distinct colors. Purple, Gold, and Teal. Each color stands for a different type of blinding condition!  We are extremely excited here at KnowtheGlow for the Golden octopus, which represents those children who have a disease related to finding a glow in a child’s eye and which, in turn, she hopes will also be used to help with raising awareness.   Hopes to offer wholesale pricing to hospitals and doctors’ offices are also in the works!

At KnowTheGlow we are cheering you on Hillary and we hope to start seeing your beautiful, clever, tactile, creative Ocular Octopus in children’s hospitals all over the US soon!  If you are interested in purchasing your own Ocular Octopus, or checking out the incredible amount of detail that went into the design, check out Hillary’s site here: https://yeagerocularprosthetics.com/the-ocular-octopus-%C2%A9. 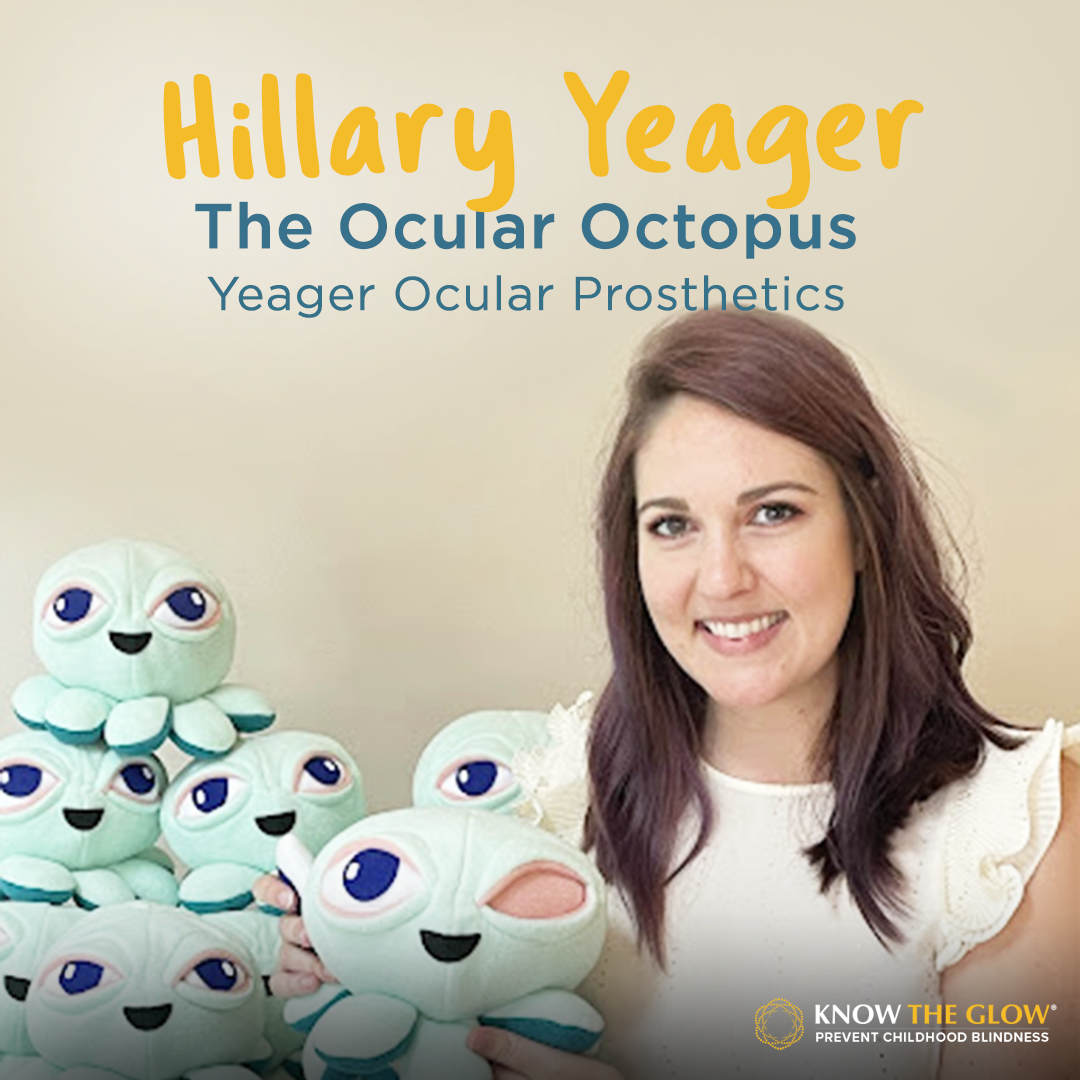