When Cody was two months old Ana noticed something was not right with her son, Cody’s, eye. It looked a little smaller than his left eye and when she took a flash photo of him for a passport to bring him home to Portugal from Oxford for the holiday, the photograph showed a glow in his eye.

She brought him to his General Practitioner who believed Cody had a blocked tear duct and a cataract, Cody was referred to pediatric ophthalmologist, Dr. Natalie Arruti, with Oxford University Hospital. Upon arrival Dr. Arruti brought in several colleagues to take a closer look at Cody. It was clear they were concerned about his vision and Ana was told that they believed that Cody had PHPV, Persistent Hyperplastic Primary Vitreous. The second most common cause of leukocoria in infants; PHPV can often look identical to Retinoblastoma and the group of doctors took great pains to examine him carefully. They performed an OCT scan and spent two hours examining him before confirming that Cody had bilateral cataracts and bilateral PHPV.

Cody had surgery the following week at the John Radcliffe hospital in Oxford. Ana and Cody stayed one night in the hospital while Cody recovered. During the surgery it was confirmed that while Cody did not have Retinoblastoma, he did have PHPV in both eyes and the retina was completely detached in his right eye. His left eye was still light sensitive and he was sent home. It took nine months for the genetic testing to be completed.  While there is no history in either Ana or her partner’s families, the genetic test did show that Cody also had FEVR, Familial Exudative Vitreoretinopathy, a genetically progressive disorder that affects the light-sensitive retina tissue in the back of the eye. They knew that Cody would need continuous monitoring and in February of 2022 Cody was referred to Great Ormond Street Hospital to be seen by Dr. Wong for a second opinion, the left eye retina had detached so surgery was once again required.  Unfortunately, the retinal detachment in his left eye meant that he had lost the light reception in that eye as well.

Cody managed well through that surgery not even having to stay overnight and was well cared for by Dr. Wong’s team at Great Ormond Street in London. His pressure remained high, so medicine was given to help care for him and the pressure has been continually monitored at checkups. Cody, now completely blind in both eyes, visits his two doctors, Dr. Wong, and Dr. CK Patel, Ophthalmic Surgeons  in Great Ormond Street. Dr. Patel is another amazing doctor who has helped Cody since he was first diagnosed. Ana and her partner are grateful to these doctors for their care and support and is also very grateful to live in a community that is full of wonderful resources ready to support Cody not only through his medical challenges but also through the additional needs due to his recently diagnosed developmental delays. Once Cody had received the certificate registering him as blind several of these tremendous resources began to assist him. With qualified teacher home visits and nursery visits and schools adapted with trained staff, Cody has a visual impairment specialist who is working to assist him with mobility. Cody will soon also have physiotherapy, occupational therapy, speech therapy and early intervention to help with his development. The RNIB (Royal National Institute for the Blind), Guide dogs and the Oxford Association for the Blind are extraordinary resources for Cody offering a lot of support. Sleeping is also an issue for Cody as his body clock does not set itself to the rising or setting sun so Ana spends many nights with a wide awake Cody, a situation which she hopes will soon change as she is expecting another child in the fall!

Fortunately the odds are strongly against Ana’s future children being born with PHPV or FEVR and we know that Cody will soon be an amazing big brother to his younger sibling thanks to the incredible care of his phenomenal family and team of support in the UK.  We, at KnowTheGlow, will look forward to watching him grow into his most amazing self and will be excited to cheer him on each step of the way. Ana and her family hope that in sharing Cody’s story and photos another mother or father will see the glow, remember Cody’s story, and follow their instincts to care. Ana feels it is so important for parents to be aware of the signs of vision disturbances and she hopes that Cody’s story will soon be helping other children find their way to early diagnosis and treatment wherever they may be.

Below please see Ana’s story translated by her into Portuguese. Perhaps one day soon KTG will be able to develop an awareness campaign for Ana’s incredible country too!  It was an honor and a privilege to speak with the amazing Ana Ramos and we have no doubt that Cody is in the best of hands with his loving family and team of support. Please help share his story and build awareness to help us find and guide to care those children still waiting who do not yet know they need to be found. 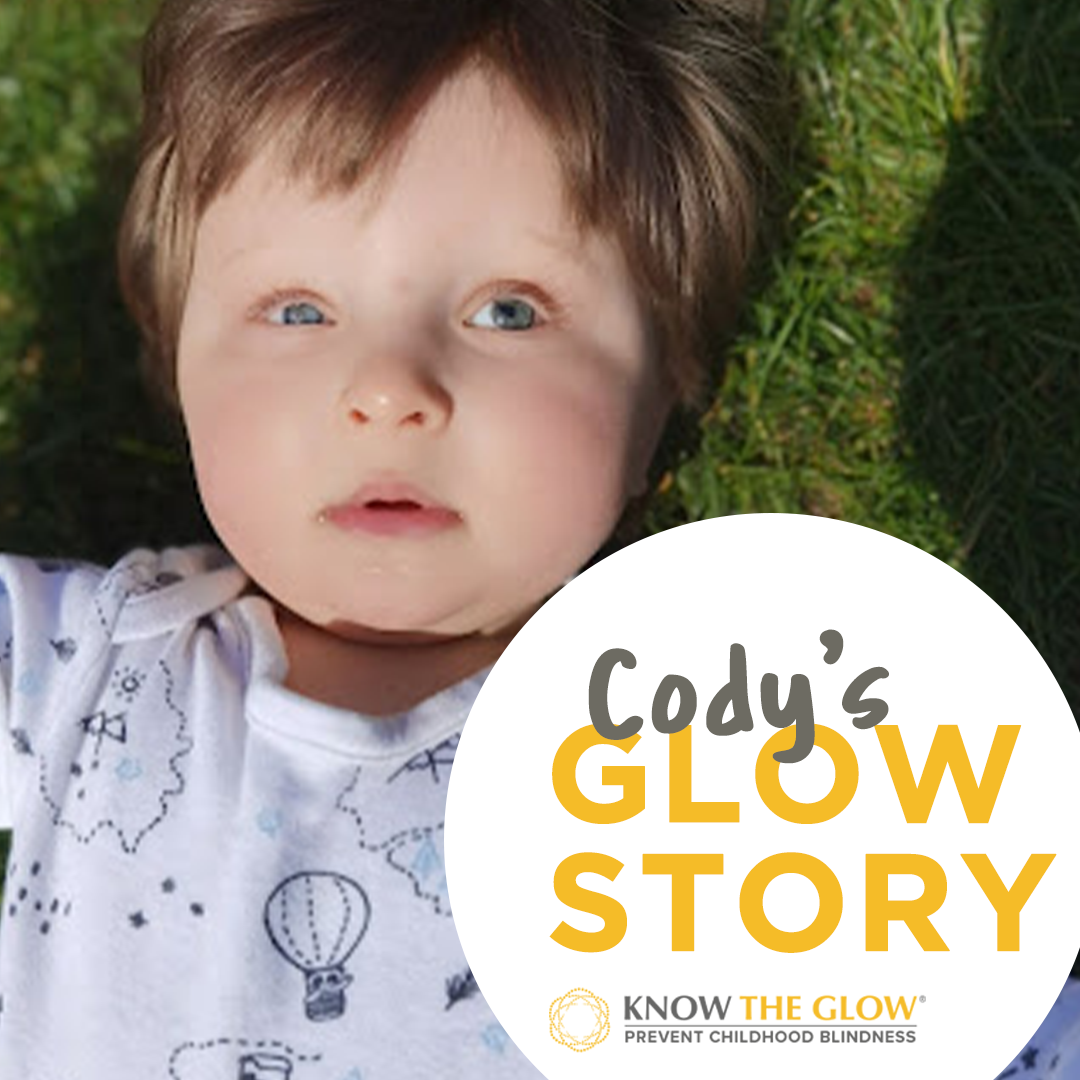